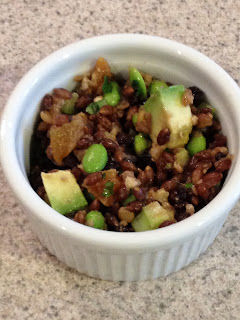 Early this morning, I read a recipe in the New York Times by Martha Rose Shulman (yesterday's paper) for a Black Rice and Red Lentil Salad.  I decided that I wanted to make it for lunch.  I went to the store to buy the ingredients, but they didn't have black rice, so I bought black barley instead.  Avocados were on sale and just ripe, so I bought a couple of those, thinking I would use them sometime but without anything particular in mind.  The New York Times recipe instructed me to soak the lentils for a couple of hours, but I felt unsure of this technique, because the instructions on the package of red lentils I purchased said to cook them in boiling water for 10-15 minutes.  So I decided to cook the barley according to the package instructions and then add the lentils for the amount of time suggested on the package.  I put together a dressing using the ingredients and proportions suggested in the New York Times, then put a little bit of it over a small test portion of salad.  I decided it needed more oomph, so I added a couple of ingredients to the dressing and changed the proportions a little, and I also added a few ingredients to the salad in order to make the flavors more complex.  I added avocado to give it a smooth, soft, mellowy something.  I added dried apricots and currants to give it a little sweetness amidst the rather heavy, earthy flavors of the barley and beans.  I added celery for a little crunch.  The result was amazing.  This is a real winner, and I am so proud of myself!  By the way, I used red lentils, thinking that the red color would look nice in the salad, but when I cooked them, they turned brown, so I think you could use any kind of lentil in this recipe and it would be fine and not make a lot of difference.

Mix all ingredients together in a small bowl.

Boil vegetable broth.  Add black barley.  After 30 minutes, add lentils.  Cook about 10 minutes more.  Check for doneness:  lentils should be soft but not mushy.  Barley should be tender but will have a slightly chewy/nubby texture.  Drain over bowl; reserve broth for another use (can be used as a vegetable broth base for soup or something).  Put lentils and barley in a bowl and toss.  Allow to cool.  Add cooked edamame beans (if you use frozen, cook in a microwave for 2-3 minutes), celery, avocado, dried fruit, nuts and cilantro.  Pour dressing over all and toss.
Posted by Wendy at 10:04 PM