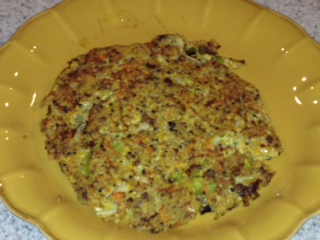 Many years ago, I bought millet cakes in Giant Food Store's store prepared food section in Baltimore.  They were absolutely delicious, and my mouth has watered for them many times since then.  I never saw them again in the store, and I have been seeking a recipe for them without success.  I made quinoa as a side dish a few days ago--I used organic tricolor quinoa that I bought in bulk at my local natural food store and cooked it in vegetable broth--and had about a cup leftover.  So this afternoon, I thought I would try to come up with something as good as the millet cake I remember from Giant Food.  I made these quinoa and vegetable pancakes for lunch.  They are not as good as what I remember of the millet cake, but they are good enough, and they used up the leftover quinoa in a creative and nutritious way.  I also had a half head of cabbage leftover after I made the Asian Vegetable Stir Fry (recipe posted on this blog), so I used some of that cabbage in this dish, too.  I put in the flax seed meal and water because the flax seed meal package said that you could use those amounts of flax seed meal and water as a substitute for an egg in baking.  I have used it successfully in a birthday cake that I made once, when I realized in the middle of making it that I did not have enough eggs for the recipe, so I thought it might work as a binding agent in these quinoa cakes. The binding was not happening enough, so I added 2 eggs.  The flax adds another dimension of nutrition, though, so I'm glad it is part of the recipe.

Saute leeks in olive oil in cast iron skillet until just beginning to brown.  Mix leeks together with quinoa, carrots, cabbage, soy sauce and mirin in bowl.  Mix flax seed meal and water together in small bowl and then add to quinoa mixture.  Add eggs and stir together well.

Scoop large spoonful of batter into skillet used to cook leeks in and cook like a pancake.  You want the pancake to be small enough to fit the spatula you are using.  If the pancake is too big, it will fall apart when you flip it.  Check after a couple of minutes by peeking under the pancake with a spatula.  When it is golden brown, flip carefully and brown the other side.  Continue to cook additional pancakes in the same manner until all the batter has been used.