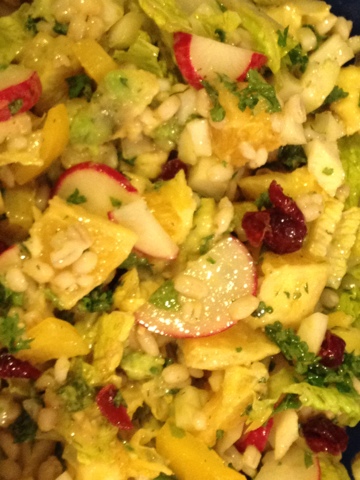 I still had 1/2 a fennel bulb left over from the salad I posted on March 10, so I decided to make another salad with it.  Some of the ingredients are the same as that one, some are different.  I cooked some barley to use in the salad, demonstrating the easy use of grains as a salad ingredient to make a heartier and more wholesome dish.  Using whole grains in salads is a great way to reduce the amount of meat you eat in a meal, if that is a goal you aspire to, because the grains will fill you up more.  I used the same dressing as I used on March 10; I happened to have some left over.  I copied it on the bottom in case you need to make a fresh batch.

Combine uncooked barley andsalted water in sauce pan and bring to a boil over high heat, covered.  Once boiling, reduce heat to simmer and cook for about 20 minutes, or until water is absorbed and barley is tender.  Remove from heat and cool in pan.  Meanwhile, combine chopped fennel, radishes, oranges, yellow pepper, parsley and cilantro in bowl and let sit so that flavors can come together. When approaching serving time, add barley, chopped Romaine, avocado, and dressing to bowl and mix with other salad ingredients.  Add dried cranberries and stir to combine.  Sprinkle salt and freshly ground black pepper to taste.

Email ThisBlogThis!Share to TwitterShare to FacebookShare to Pinterest
Labels: grain, salad, side dish