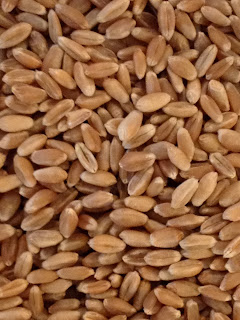 Unfortunately, I forgot to take a picture of this dish before it got eaten up (the photo shows uncooked farro).  But it was very tasty.  It takes a while to cook, but you can do other things in between stirring the farro.  Farro is a highly nutritious ancient whole grain, used in Mediterranean cooking.  It is very high in protein and fiber, and is related to wheat.  You can buy it in health food stores or grocery stores that carry gourmet items.  I bought some at Bishop's Orchard, in Guilford, CT, for those of you who live on the Connecticut Shoreline.  I made the mushroom broth a few weeks ago, when I made the wild mushroom pasta sauce, and froze the leftover broth.  I thawed and heated it in the microwave for this dish.  Typically, recipes ask you to boil the broth for risotto in a separate pan, which you can also do.  I just found it easier to do it all in the microwave because the broth was already in a Pyrex bowl that I had frozen it in.  If you make the broth fresh, it would probably be easier to use it straight from the pan you make it in.  Also, if you are pressed for time and don't have mushroom broth on hand, you could just use vegetable bouiilon or, if you don't care about keeping the dish vegetarian, you could use chicken or beef broth.  The wild mushroom broth lends the dish a delicious flavor, though, which will be changed with a variation in broth. Make sure the white wine you use is of a quality you would want to drink straight.  It makes a difference!

Melt butter and olive oil in wide deep pan over medium heat.  Add onion and sauté until translucent.  Add farro and stir for a couple of minutes, trying to make sure the grains are coated with the butter and oil.  Pour in white wine and stir until wine is mostly absorbed by the grains.  Add warm mushroom broth ½ cup at a time, stirring.  Allow grains to absorb most of broth before adding the next half cup.  This will take a pretty long time (maybe more than an hour).  You should stir it every once in a while while it is cooking.  When you get to the last bit of broth, dissolve saffron in it before adding to the risotto.  At the end, the consistency should be moist, like porridge, and the farro should be tender.  Add more liquid (broth or water) if necessary to bring dish to the right consistency.  Add parmesan cheese and pepper to taste and stir.  Cover and let rest for a few minutes until cheese is melted.  Taste for salt (I did not need to add any, as there was enough salt in the broth and cheese, but you might want to add some if you think it needs it).  Serve warm.

Soak dried mushrooms in bowl with boiling water to cover for about an hour.
Heat olive oil in large pot and sauté Vidalia onion until just beginning to brown.  Add garlic cloves, then leeks and carrots.  Pour in 10 cups water and dried mushrooms and their soaking liquid.  Add rest of herbs and vegetables.  Bring to boil.  Simmer for 2 hours.  Strain.  Freeze what you don’t use today.  You can use it for sauces, soups and to flavor simple grain dishes.
Posted by Wendy at 9:19 AM