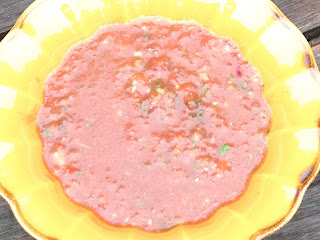 I owe the seed of this recipe to my mother-in-law, who has sent me numerous gazpacho recipes over the years and has earned herself a reputation for making the most delicious gazpacho.  I don't think she ever makes it the same way, however, so her approach gave me the courage to do my own thing, using ideas from some of the recipes she has passed along to me.  I made a version of this last summer for someone who subsequently asked me for the recipe, but I could not provide it since I had not really followed a recipe and could not remember exactly what I did.  This time I wrote everything down as I prepared it.  The result is a delicious gazpacho that lacks the strong raw onion flavor sometimes associated with gazpacho.  It is very easy to eat, with a somewhat fruity taste, perfect for a hot summer day.  One of the keys to a delicious dish is to use the best and most flavorful ingredients.  I used heirloom tomatoes from a local farmstand.  They taste so much better than the perfectly round, red tomatoes you most often find.  A few days ago, I made a dish that required chopped tomatoes and I strained the juice from the tomatoes and put it in a jar in the refrigerator.  I used about a half cup of this juice in the measurement for tomato juice; the rest of the tomato juice came from a bottle I bought at the store.  Make this early in the day, put it in the refrigerator and you have an easy evening ahead of you!

Place vegetables and parsley in large bowl and blend with hand stick blender.  Do not over blend, as it is nice to have small chunks of vegetables in the soup.  Add garlic and blend more.  Add tomato juice, red wine vinegar and olive oil and stir.  Stir in salt, cumin and pepper.  Refrigerate several hours before serving.