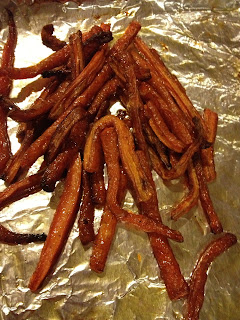 I think I might be addicted to roasted vegetables.  I find myself craving them, quite frequently.  Something about roasting them in olive oil brings out their natural sweetness, and that sweetness juxtaposed with the saltiness of the sea salt that gets sprinkled over them and that seeps in as they cook, is just heavenly.  I recently acquired some special white balsamic vinegar, imported from Italy, the kind that comes in a very small bottle because it is expensive (I think, though I don't know how much it cost because it was a gift) and has concentrated flavor.  The kind that is of such high quality that you really can almost drink it by itself.  It has a sort of sweet flavor if you just put a dab on your tongue.  I had used it in with olive oil in a salad dressing, but that did not seem to do it justice.  I thought that if I roasted vegetables in olive oil and then just drizzled a little bit of this wonderful vinegar over them, the vinegar would give the dish a nice oomph and take it to another level.  I was right.  I had never roasted carrots before, but am sure these would have been tasty even before I drizzled the special vinegar over them.  But the vinegar gave it pizzaz, something extra.  I got the idea for covering the carrots during the first part of roasting from Cook's Illustrated, but the rest of it is my idea (they used butter in the recipe I saw).
1 lb. carrots

Preheat oven to 425 degrees.  Cut carrots in half crosswise, then quarters lengthwise.   Spread in single layer on baking sheet (I cover with foil, for easy cleanup) and toss with olive oil, salt and pepper.  Cover pan tightly with foil and bake for 15 minutes, then remove foil cover, stir, and roast about 30 minutes more, tossing periodically, until done.  You can tell they are done because they just start to get brown and crispy looking.

Drizzle white balsamic vinegar sparingly over all before serving.  Serves 4.
Posted by Wendy at 5:02 PM

Email ThisBlogThis!Share to TwitterShare to FacebookShare to Pinterest
Labels: carrots, side dish, vegetables