Stir Fry for Vegetarians and Carnivores at the Same Table

Yesterday I received in the mail and started reading a new book, Healthy Eating, Healthy World:  Unleashing the Power of Plant-Based Nutrition, by J. Morris Hicks with J. Stanfield Hicks.  It seems to pull together and build upon other books that have greatly influenced my thinking about what I eat:  The China Study, by T. Colin Campbell and Thomas M. Campbell, and Eat to Live, by Joel Fuhrman, as well as other books that I have not read but apparently also discuss the health benefits of a plant-based diet. 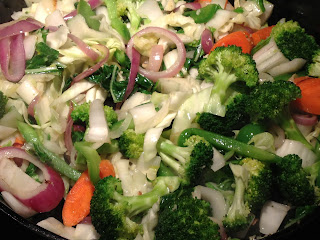 Yesterday morning, I had pulled a couple of boneless, skinless chicken breasts out of the freezer and anticipated making a stir fry for dinner with chicken, veggies, and teriyaki sauce.  After reading the first chapter or so of this new book, I decided I really did not want to eat meat for dinner.  Yet I knew that others in my family would not appreciate or feel satiated by a meal of stir-fried veggies and rice alone.  So I decided to cook the chicken in a separate pan from the vegetables, using the same sauce to flavor the contents of both pans.  That way the people who wanted chicken teriyaki could have it, and I could just eat vegetables.  I used the vegetables that I found in my refrigerator. One thing that you might be unfamiliar with is black radish.  I bought this vegetable from a local farm, not knowing what it was or how to prepare it.  I have enjoyed it raw, dipped in hummus, and decided to see what it would taste like in a stir fry.  It was delicious!  If you don't have access to this vegetable, you might try substituting another crunchy white vegetable--jicama, jerusalem artichoke, or water chestnuts?--  for similar effect.

Now, I have posted Asian stir fry dishes on this blog with sauces I concocted from scratch.  Sometimes, though, I prefer the ease of pulling a bottle of Trader Joe's Soyaki Sauce from the pantry to quickly and easily flavor a dish.  It is definitely better for the planet, however, to make your own sauce (think about cutting out the middle-man factory that produces and packages the sauce, and all the pollution a factory creates).  If you want to combine the ideas in today's recipe with a homemade sauce, feel free to use the search bar in the upper lefthand corner to look for "stir fry" and  find a recipe I posted previously with a homemade sauce.  Those of you who decide to go with Trader Joe's Soyaki or another bottled sauce, just know that, once in a while, I share your imperfection.  We can try to compensate for our imperfection by taking some other action to counteract planet destruction:  maybe replace a plastic-packaged item in our shopping cart at the supermarket next time with an item that is sold in-bulk (ideal) and put it into a recycled container we bring from home (even more ideal), or at least replace the plastic-packaged item with something packaged in a non-plastic container.

It is time to start cooking!  First, slice the chicken breast into strips.  I used 2 boneless, skinless chicken breast halves to serve 3 people.  Place strips in a bowl and pour enough sauce over them to cover.  Toss so that all strips are covered with sauce.  Marinate on the counter while you make the rice and prepare the vegetables for cooking.


Heat olive oil in a skillet over medium high heat.  When pan is hot,  stir fry chicken strips (scoop them out of the marinade with a slotted spoon so that there is not too much sauce in the pan, which would cause them to steam rather than fry) for several minutes, until chicken is cooked.  Turn off heat.  Meanwhile, heat another skillet for the vegetables. 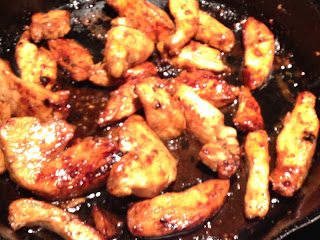 3 TBS olive oil
1 onion, sliced in half and then sliced horizontally (I used half a red onion and half a yellow onion because they were in my refrigerator)
1 clove garlic, pressed
1 head bok choy, sliced horizontally
1 carrot, sliced horizontally on the diagonal
½ black radish, sliced into matchstick pieces
¼ head cabbage, sliced
¼ green pepper, sliced
1 head of broccoli, cut and broken into florets
½ lb. snow peas
bottled teriyaki sauce 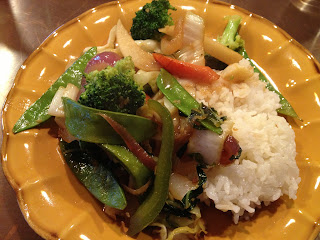