Creamy (Without the Cream) Broccoli Soup

Figuring out ways to eliminate animal products from dishes I like is my current passion.  Our planet would be so much better off if humans did not eat meat.  It is hard for our environment to absorb all the waste products that come from large factory farms.  Methane from livestock--both from digestive processes and manure storage in holding tanks or lagoons-- is one of the biggest sources of greenhouse gas emissions.  Excessive quantities of manure leach into ground water and surface water.  Local meat from small farms definitely is kinder to the environment than meat from factory farms, but it is challenging for most of us to purchase local meat.  I find it easier to eliminate meat from many meals than to buy local meat for daily consumption.  Also, the more I read, the more convinced I am that a diet devoid of animal products is healthier than one that includes animal products.  While I have not eliminated animal products completely from my diet, I am trying to reduce my use of animal products substantially.

I have been fantasizing about creating a vegan version of Cream of Broccoli Soup that tastes as good as a couple of fabulous broccoli soups I have had in restaurants over the years.  I really like broccoli soup, but there have been occassions when I absolutely loved it.  Whenever I eat something especially good in a restaurant, I try to detect the various ingredients that give it the subtle taste I enjoy.  Sometimes I ask the waiter or waitress and find out secret ingredients that way.  I remember once eating a broccoli soup at the Museum Cafe in Baltimore, many years ago, that had fennel in it, and that soup was particularly memorable.  I don't know if this version is as good as that one was, but I tried. 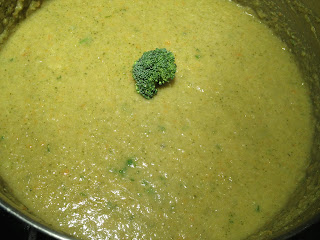 I began this soup with a mushroom broth.  I made stuffed mushrooms the other day, and then something else with mushrooms in it yesterday, and saved all the stems when I cleaned the mushrooms.  When I prepare portobello and shiitake mushrooms, I remove the stem and usually throw it away.  I decided, this time, to save them in a container on the counter until I felt like making broth.  This morning, I put the mushroom stems in a pot, along with a quartered onion, a carrot, some salt, peppercorns, a couple of sprigs of thyme, a handful of parsley, and a bunch of water--enough to cover everything, and since I wanted enough broth to make a batch of soup for dinner, I made sure there was enough water to end up with enough broth for a batch of soup.  In the end, there was about 6 cups of broth.  I just eyeballed it, though.  This process took about 5 minutes.  I put the pot on medium heat and did a bunch of things:  went to the grocery store, did laundry, started spreading mulch in the garden . . . The point is, you can make your own broth, using leftovers, without spending much time.  It is best if you can at least be in and out during the cooking time, but if you can't, throw it all in the slow cooker!  Using leftovers in this way is the greenest way to cook.  You are using up stuff that would end up in the trash.  You are saving all kinds of natural resources by cutting out the food manufacturer that processes broth, packages it, emits goodness-knows-what into bodies of water and the air, and then more stuff into the air by transporting it to the store where you buy it.  And--BONUS!--you are making something wholesome.

I have learned that a potato in a pureed soup offers creaminess without the cream.   I recall tasting tarragon in a broccoli soup I liked once.  Carrots and onions always offer yumminess to soups, so I wanted to include them in the base.  This is how I decided what to include.  At the end, I tasted and added this and that.  I hope you like the result!

Bring all ingredients to boil.  Simmer, uncovered, for about 2 hours.  Strain.

Saute fennel and onion in olive oil until translucent.  Add carrot and potato and sauté about 5 minutes more.  Add broth, salt, pepper, orange zest, juice from half an orange, and broccoli.  Simmer, covered, until broccoli is tender, about 10 minutes.  Add tarragon and parsley.  Blend with stick blender until soup is creamy.