Last weekend, I cooked a couple cups of chickpeas (also called garbanzo beans) in the slow cooker.  It was really easy.  I woke up on Saturday morning, rinsed the chickpeas in a colander, put them in the slow cooker with a bunch of water and an onion, turned the slow cooker on "low" for 10 hours, and went about my day.  Later in the day I added some salt.  At the end of the day, I unplugged the slow cooker and let the chickpeas sit in the water for another hour or so, until I felt like scooping them out of the water with a strainer and putting them into a container in the fridge until I was ready to use them.  A very laid back way to prepare chickpeas, and much better for the planet than the canned alternative (think of the resources required to process the chickpeas in a factory, to put them in cans, to transport the cans to the supermarket, to transport the empty cans to a recycling facility and then the resources required to recycle the cans).

The next day, I made a small batch of hummus with some of the chickpeas.  (Use the search bar in the upper left hand corner of this blog to find the best hummus recipe.)  Last night, I knew I needed to finish the rest of the chickpeas.  I could have put them into the freezer right after I cooked them, and then there would have been no pressure to use them quickly, but I neglected to do that, so I needed to come up with a recipe.  I spent the day imagining how to prepare the chickpeas.  I have had dishes in the past that included chickpeas and canned tomatoes in a stew.  I had a couple of perfect, large juicy tomatoes from last weekend's farmers' market on my counter.  I decided to sacrifice one of them for this dish.  I also had a bunch of kale that needed to get consumed.  And I had garlic and onions on hand, as I try to always have these essential ingredients available.  As an aside, all of these vegetables except the chickpeas came from the farmer's market, so this is a true locavore recipe.  I had leftover brown rice from the night before, enough for the three of us who would be eating dinner together.  Simple supper! 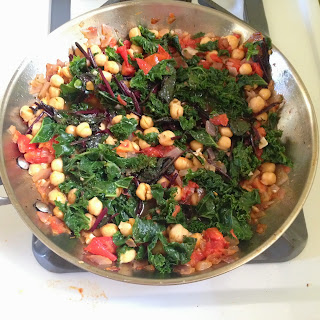 I decided to be nice to the non-vegetarians in my family and provide meat for those who wanted it.  So I bought a skinless, boneless chicken breast (organic, and hopefully sustainably raised) and cut it into chunks.  I sprinkled Italian seasoning, salt and pepper on the chunks and then stir-fried them in a separate frying pan in grapeseed oil.  After the chickpea, tomato and kale dish was finished cooking, I transferred some of it to the frying pan with the chicken and heated it all for awhile before serving.  Thus I had a vegan meal as well as a meal with meat in it, all in one, more or less!  All delicious and easy.

Meanwhile, heat large pot of salted water to boiling.  Add kale and cover.  Cook for about 15 minutes, then strain.  Add kale to simmering chickpeas and tomatoes.  If you happen to have any sauteed greens leftover from a previous meal, you can add them also.  Simmer awhile longer.  Taste for seasoning.  Serve over brown rice or another grain.  Serves 3-4.