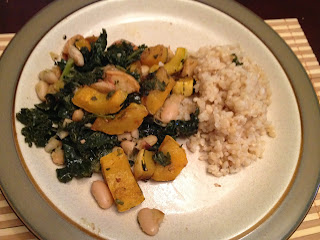 I just started to read a new report, Trade and Environment Review 2013, published by the United Nations Conference on Trade and Development entitled, "Wake Up Before It's Too Late:  Make agriculture sustainable now for food security in a changing climate."  One of the things it discusses is that extreme weather events will reduce or eliminate the ability of some agricultural regions to produce food.  It also points out that raising livestock uses more planetary resources than growing plants for food. As human population increases and demands greater quantities of meat, as is the current trend, there will be less food available for the global population as a whole.  It predicts political instability and riots as a result.  Sometimes, thinking about large scale devastation and global problems seems out of our individual control.  Yet we as individuals can choose whether we will act in a way that will add to or subtract from the destructive trends of human behavior.  I might not be able to control how all the world behaves, but I can control my own behavior, and to an extent the behavior of my family members.  I hope to influence my readers, as well, who can then influence their family and friends.  We do what we can do.  By consuming plants instead of meat, we use our planetary resources more conservatively to feed ourselves.  By supporting local agriculture, we help to ensure a food supply even if a catastrophic weather event wipes out a major agricultural region that provides food on a large-scale. 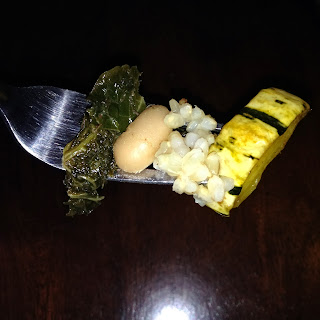 Meanwhile, heat additional olive oil in a large skillet over medium low heat.  Cook garlic briefly (just for a few seconds), stirring, and then add kale.  Toss kale so that it becomes coated with olive oil.  Sprinkle 1/8 tsp. sea salt over kale and toss again so that garlic, salt and olive oil become mixed with kale.  After kale cooks for 5-10 minutes and is wilted, add beans and rosemary and stir.  Cover and continue to cook over low heat for about 10 minutes.

To serve, toss squash, kale and beans together.  Serve with a steamed grain, such as brown rice.  Serves 4.