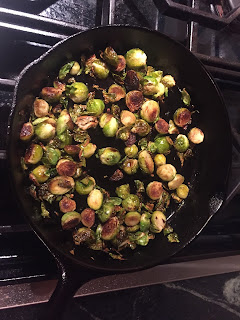 Preheat oven to 400 degrees.  Toss brussel sprouts with olive oil and chopped or pressed garlic, making sure to coat all sides of each sprout.  Spread in roasting pan or on cookie sheet covered with aluminum foil (for quick clean up, all you have to do is throw away the aluminum foil).  Roast for about a half hour, until beginning to brown, and tossing several times during roasting.

Toss with enough vinaigrette to coat.
Posted by Wendy at 2:11 PM No comments: Links to this post 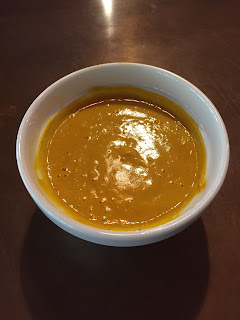 After a bit of a lengthy hiatus, I am back! In hopes of helping people move towards more sustainable eating practices, I will begin again to post recipes and tips about cooking plant-based meals.  Recently, I came across a recipe for butternut squash coconut soup that called for Thai red chili paste.  I did not have this ingredient, but I did have sriracha sauce.  I wasn't sure whether it would work as a substitution, so I made two batches of soup with identical ingredients and procedures, except that in one I used roasted red chili paste (I had gone out and purchased it for the recipe) and in the other I used sriracha sauce (identical quantities).  I changed a couple of things about the recipe, so I think it is ok to post my version here without risking plagiarism.  My experiment told me that the soups tasted pretty much the same, except that the version with roasted red chili paste was not at all spicy, while the version with sriracha sauce was a little spicy.  I prefer the spiciness of the sriracha version, so I will share that version with you.  Also note that I decided to spice up the red chili paste version afterwards by stirring a squirt of sriracha sauce into a bowl of the soup when I reheated it in the microwave.  This resulted in an even spicier version, which I also liked.  The recipe below contains just enough sriracha for a slightly spicy soup, but if you like it spicier, you can just add more sriracha to taste.

Preheat oven to 400 degrees. Line baking sheet with aluminum foil and grease with coconut oil.  Place squash halves cut-side down on baking sheet and roast in heated oven until soft when poked with a fork (about a half hour).

Meanwhile, in a pot saute onions over medium heat in olive oil or coconut oil until translucent.  Stir in garlic. After about 30 seconds (before garlic browns), stir in sriracha sauce. Turn off heat if you are waiting for butternut squash to finish roasting.  When butternut squash has finished roasting, peel off skin and discard (you might want to wait a little while so that it is cool enough to handle).  Turn on stove again to medium heat.  Add butternut squash to ingredients in pan and stir everything together, trying to mash up the squash a bit so that it mixes up with the other ingredients.  Add vegetable broth and heat to boiling.  Simmer for about 5 minutes.  Add coconut milk and heat for about a minute.  Puree soup in blender, or with a hand blender in the pot. Makes about 3 quarts soup, approximately 6-8 servings.
Posted by Wendy at 10:37 AM No comments: Links to this post