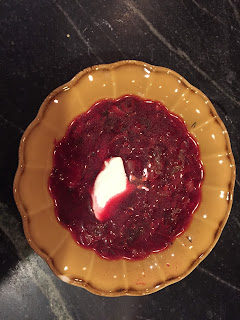 The most delicious borscht I had ever eaten, until maybe now, was from a recipe in The Silver Palate Cookbook. The only problem with it is that it uses beef broth.  I have been craving beets recently, and especially I have been craving that borscht.  So I wanted to see if I could adapt the Silver Palate recipe into a vegetarian version. One of the things I really liked about the original recipe was the extra dimension of flavor from the beef broth.  Another thing I liked was the texture, with small chunks of beef as well as chopped vegetables.  Since mushrooms have a sort of equivalent texture and flavor to beef, I often find that I can use them as a substitute for beef when adapting recipes to vegetarian versions.  So I decided to try this here.  I made a wild mushroom broth full of flavor from dried wild mushrooms as well as various vegetables and vegetable trimmings.  Using vegetable trimmings is very kind to our planet, as it reduces garbage as well as the need for other food items that would provide flavor. I later added chopped fresh mushrooms to provide some of the meatiness that I like in the Silver Palate recipe.  I think this is really delicious, maybe even as good or better as the original Silver Palate version--and definitely better for the planet. It is hearty, nutritious, and can be a simple meal by itself, perhaps with some whole grain bread on the side. And this is definitely great comfort food for a cold winter's day--or night.

approximately 2 pounds beets (about 6 medium), peeled and grated or chopped finely (a Vitamix will work well for this task).  Use peels and ends in broth above.

Pour about 2 cups boiling water over dried mushrooms and let soak for ½ hour to an hour.

Meanwhile, place beets in a pan with enough water to cover.  Simmer, covered, for about 20 minutes, or until tender.  Turn off heat and set aside.

After dried mushrooms have soaked, combine them with their soaking liquid in a large pot with vegetables (no need to chop carrots and celery) and trimmings, bay leaves and salt.  Pour at least 12 cups water in pot, or a little more.  Make sure all solids are covered with water.  Cover, bring to boil, then simmer for about 2 hours.

After mushroom broth is finished cooking, strain all solids out.

Saute chopped onion in a little olive oil in a stock pot until translucent. Add other chopped vegetables, mushroom broth, and cooked beets in their cooking liquid to the pot and simmer for about an hour, or until all vegetables are cooked and tender. Add salt and pepper to taste.  Add chopped dill and serve with a dollop of sour cream in each bowl.  Garnish with additional chopped dill if desired.  Makes approximately 12 servings.