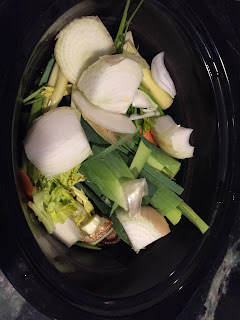 The last recipe I posted, Vegetarian Borscht, was so delicious, but the wild mushroom broth I made as its base took awhile to cook.  I was lamenting the time-consuming nature of the soup preparation last week as I savoured bowl after bowl of the soup throughout the week.  I was afraid that many of my followers might never try making the soup if the broth took so long to make.  But I really think the broth was key to the wonderful flavor of the borscht.  The wild mushroom broth gave it more complexity and depth, so that I think the soup would have suffered if you made it with canned vegetable broth or instant broth.  So I decided to test out a slow cooker version of the broth.  When you make the broth in a slow cooker, it only takes 5 minutes of your time to put a bunch of veggies in the slow cooker and then just let them cook for about 4 hours.  You can do it the night before you want to make the borscht (or any other soup or stew), or you can do it in the morning and just leave it until it is time to finish cooking at dinnertime (in this case you will cook it longer than 4 hours, you can cook it all day, but it does not take any more of your time in the kitchen).  Making your broth this way can use up odd bits of vegetables that might otherwise get thrown away, so by reducing your garbage you are taking a small step towards improving the condition of the planet.  That is my mission, to give you small ways for you to do your part to preserve the environmental integrity of our Earth.

Although I list ingredients below for stock, you do not have to follow it exactly; you should adapt it to accommodate veggies you have on hand, and include whatever scraps you might have. As a general rule, though, you will always want to include some form of onion, whether yellow, vidalia, leeks, or another type. Of course, mushrooms are required to make it a mushroom broth, and they will give it a meaty flavour that gives the finished product, such as borscht (though do knot limit yourself to only using this for borscht; you can make any kind of soup!), a more complex flavour. I also pretty much always include carrots in any broth, as they impart a pleasant, sweet flavour. Celery is another favourite veggie to include, for pleasant, sweet flavour.

Place dried mushrooms in 6 quart or larger slow cooker. Pour boiling water over them to cover. Add other vegetables to pot, then add water, leaving approximately 2 inches free at top of pot, or amount of space recommended by slow cooker manufacturer. Cook at high temperature for about 4 hours or low temperature for 8 hours or more. Strain before using broth as base for a soup. I use a colander to strain the broth, straining liquid into a large bowl that the colander rests into. Makes about 8 cups. 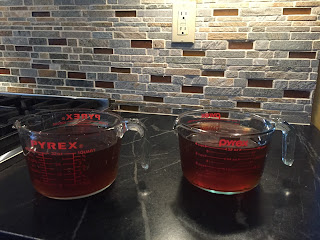 Posted by Wendy at 9:13 PM No comments: Links to this post