The recent Intergovernmental Panel on Climate Change (IPCC) report warning about the necessity of making rapid changes in order to prevent catastrophic effects of global climate change is sobering.  It is also frustrating, as an individual, to lack control of many elements contributing to climate change.  One thing we can control is how and what we eat.  Agricultural practices relating to meat production lead to large amounts of carbon emissions.  One big reason is because the earth cannot absorb all the animal waste concentrated on large farms.  By eating less meat we reduce the demand for large scale animal farming and create a higher demand for plant production.  These actions, if taken by many people, can have a positive impact on carbon emissions.  That is what I am trying to help along with this blog, by providing ideas for people to prepare meals using less meat.

Quinoa is a high protein grain that can act as the base for a vegetarian entree because it is filling and nutritious.  When cooking quinoa, always rinse it first in a fine mesh strainer, as this will remove some of the bitter coating.  I find that, in salads, quinoa tastes best when combined with some ingredients which have natural sweetness, such as fruit.  This salad is hearty enough to act as a main course, but you could also use it as a side dish. 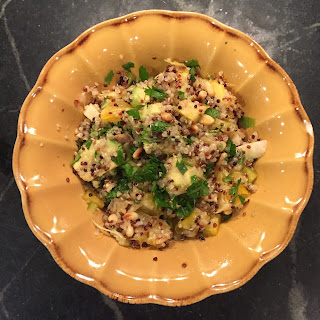 Note:  to toast pine nuts, place in dry cast iron skillet and heat over medium heat, stirring, until nuts just begin to turn brown, about 5 minutes or so.
Posted by Wendy at 3:58 PM No comments:

I picked up some frozen langostino tails from Trader Joe's, which are sourced from Chile and already cooked, because I thought they would be good to have on hand for a quick and easy meal.  Langostino sourced from Chile is relatively sustainable due to the Chilean government's strict oversight of its fisheries to prevent overfishing. This is a quick and tasty sauce to serve over pasta, and includes local veggies (in my case the mushrooms, green beans, shallots and tomatoes were farmed locally). 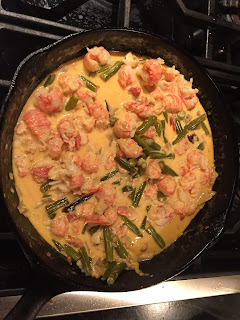 
Chop together garlic clove and shallot. Saute in butter and olive oil over low heat. Stir in mushrooms and cook for a few minutes, then add green beans and tomatoes and continue to cook and stir.

Add white wine and cook until wine is reduced by half.  Add heavy cream and cook, stirring occasionally,  until thick, about 20 minutes.  Add langostino tails and cook until heated through, about two minutes.  Add salt and pepper to taste.  Serve over pasta. Garnish with chopped parsley.  Serves 4.
Posted by Wendy at 5:59 PM No comments:

Although summer has passed, local farmers are still producing lots of nice vegetables.  This recipe uses several items I bought from local farmers:  eggplants, onions, sweet peppers, and wild mushrooms.  By supporting local farms, you can have a positive impact on your local economy and on the overall environment.  Local farms tend to have a less negative impact on the planet than large industrial farms that supply most of our grocery stores.  By supporting farmers who live close by, you encourage their existence and reduce our dependence on large industrial farms that pollute the environment more.  Your food will likely taste better, too! 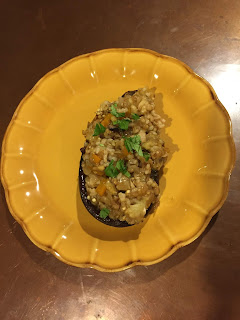 Cook rice according to package instructions. (You could also use 1-2 cups of leftover rice, instead of cooking fresh rice.)

Meanwhile, heat grapeseed oil in 10" frying pan.  Saute onions over medium heat, stirring occasionally, until they start to become translucent.  Add garlic and continue to stir for a minute or two.  Stir in diced peppers, then mushrooms, and continue to cook, stirring occasionally, until vegetables soften. Stir in ginger and cook for a few minutes.  Turn off stove until rice and eggplant are cooked.  Mix soy sauce, mirin, vinegar, sesame oil, and sugar together in small bowl or cup and set aside.

When rice and eggplant are cooked, scoop out eggplant flesh from shells and add to vegetables in frying pan.  Stir in rice and mix all together.  Add soy sauce mixture and stir until everything is combined. Spoon mixture into eggplant shell halves.  There might be some mixture leftover that will not fit in shells.  (You can eat the leftover mixture as is or try stuffing another scooped out vegetable--such as any kind of squash or bell pepper-- for lunch tomorrow!)

Put stuffed eggplant halves on same baking sheet back into oven and heat for 5-10 minutes.  Garnish with chopped cilantro before serving.  Serves 2 as main course or 4 as side dish.
Posted by Wendy at 12:44 PM No comments: